This holiday week was going far too quick for me!

Thursday morning, I’m lying in bed wondering what the weather will be like when I open the blinds today. The cab area only has curtains around the screen, so we are not in total darkness, but the chinks of light coming in don’t give any indication of what to expect.

Sitting up, and with the excitement of a child opening a present, I unclip the rear window blind and lower it down………….

“Oh no!! The ancient mariners are back” I announced to a very puzzled T

“Huh!, what are you going on about”

Now bearing in mind he’s never seen ‘The Fog’ and I hadn’t explained how my imagination had gone into overload yesterday, I guess it must have seemed a very odd thing to say.

Five minutes of trying to explain who the ancient mariners were, and him with a ‘jeez, she’s away with the fairies’ look on his face, I gave up, and said “we’ve got a sea fret again”

We followed the routine of the previous days, bedding away, dogs fed, then over breakfast we discussed the plans for the day. It looked like another inland trip, so we prepared the motorhome to move off again.

Driving through the swirling mist on the campsite, we joined the road heading towards the Abbey, rounded a bend to see…. 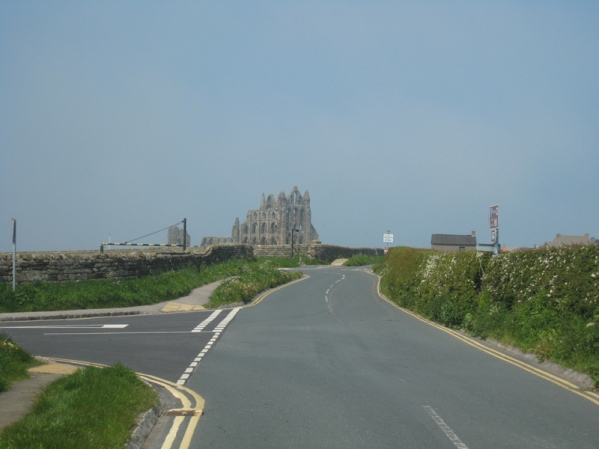 The Abbey bathed in sunshine with blue skies all around. Looking back in the wing mirrors, the campsite was still shrouded in the grey mist.

Driving into the bustling village and over the railway crossing, we followed the signs to the car park and paid our fee. Checking the angle of the sun, that by this time was getting quite hot, we found a sheltered place to park up under the trees.

First thing first, the dogs needed at bit of a walk, so heading off into the surrounding wooded area, we followed the narrow tracks, hoping one of them might lead down to the nearby River Esk.

No such luck, the nearest we got to the river was a fenced off footpath, with a fifteen foot drop. 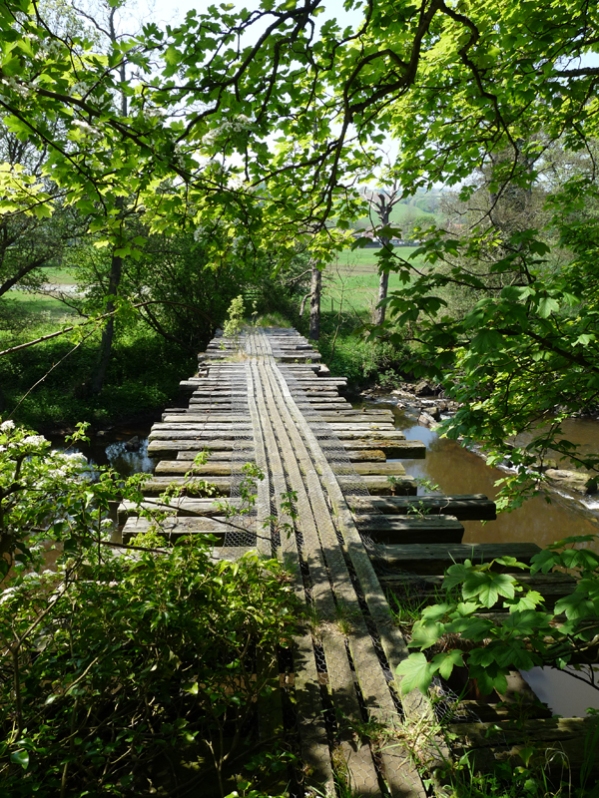 We did come across this bridge though, which looked like it might have carried some old rail track at some time or other.

Heading back to the van, we grabbed a bite to eat, watered the dogs, and decided to wander up into the town and have a look at the old rail station. 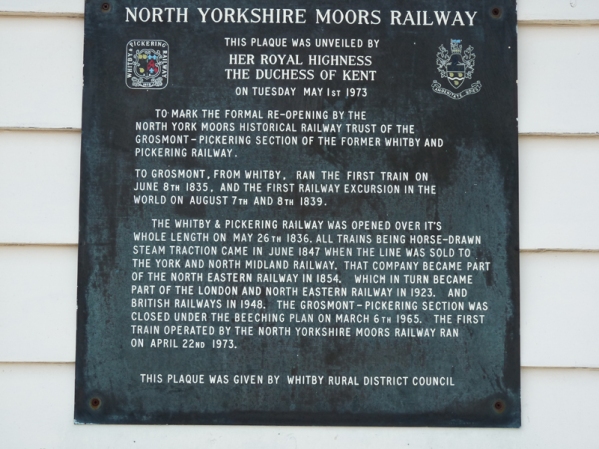 What an interesting history this station has. In 1839, the line between Whitby and Grosmont ran the first railway excursion in the world, a plaque at the station, tells a brief history, more detailed information can be read here. 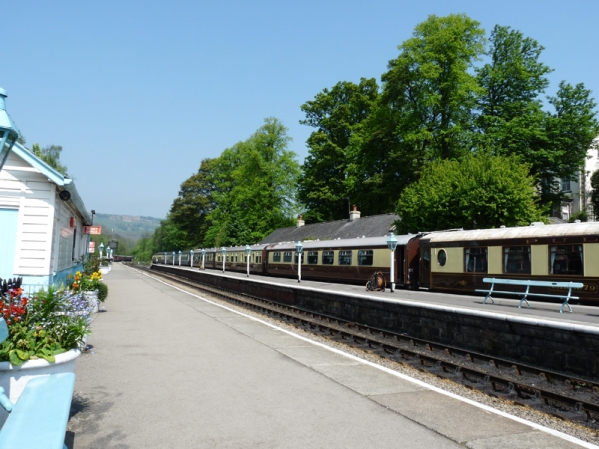 Looking down the platform at Grosmont station, a very picturesque view towards the moors in the distance.

Just over the rail lines, was a very inviting looking pub, where we decided refreshments were required. The Station Tavern, perfectly positioned to watch any passing steam engines, we plonked our bodies down, to watch the world go by. 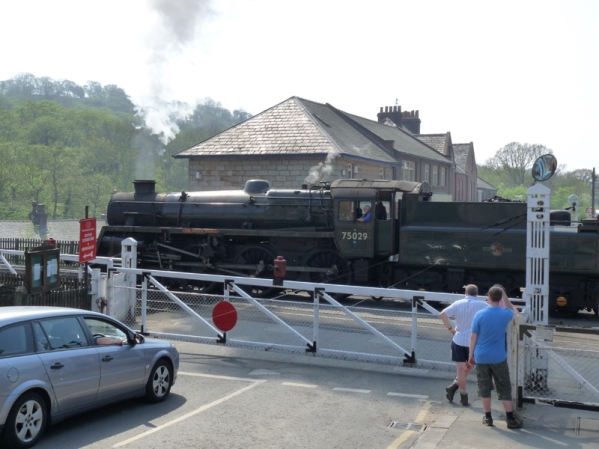 It wasn’t long before we were rewarded with The Green Knight passing by, and my mind drifted to how this scene must have looked over a hundred years ago, and how many people had sat in this very spot where I was.

Just opposite where we were sitting, was a sign ‘to the engine sheds’, so suitably refreshed, we crossed over to have a look. 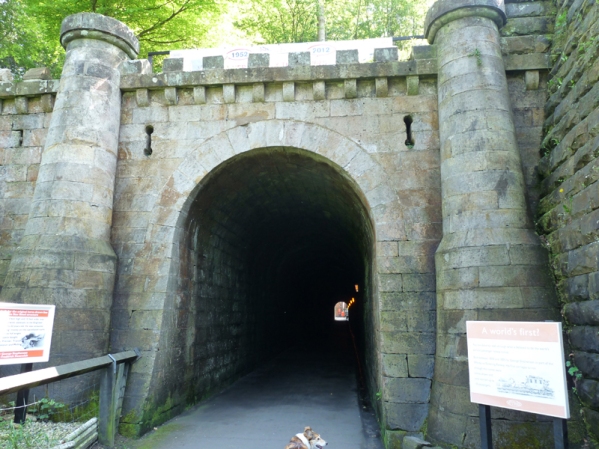 Walking down the footpath, it led to Grosmont Tunnel, which was built as part of George Stephenson’s horse-drawn railway. Another possible first? The sign at the entrance suggested, Britains’ first railway tunnel, as well as the worlds first passenger tunnel. Continuing through the tunnel, there was free entry to view the engine sheds and although dogs were not permitted, there was a special shaded area to tie them up, with water bowls. I decided against leaving Sal and Jasp alone, so waited outside, while T went to have a look.

Heading back towards the rail crossing, down through the town, and past the car park, we went in search of the river again, staying on the road this time. 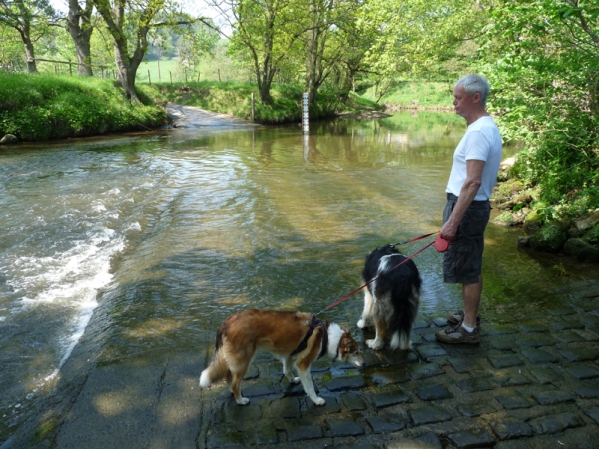 We found a ford, with extremely slippery cobbles and at almost a foot deep, not something we’d have wanted to drive through with the motorhome (if only I had my land rover). S&J enjoyed another cooling drink.

Driving back to the site, we both agreed, this had been another excellent day.

Dinner that night? Lasagne for T, and I was looking forward to my tortellini I thought I’d bought the day before, but I couldn’t find anywhere in the motorhome. After searching the whole van, I was getting really annoyed, that we’d paid for it, and left it at the supermarket, until I found the receipt for that days’ shopping, NO tortellini 😦 so it was beans on toast for me. 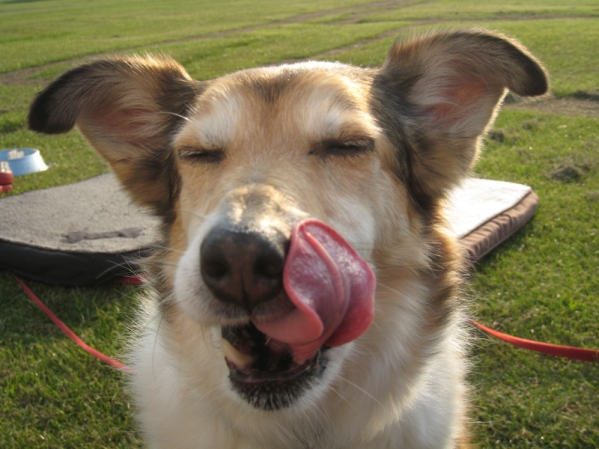 Sal enjoyed some toast too. 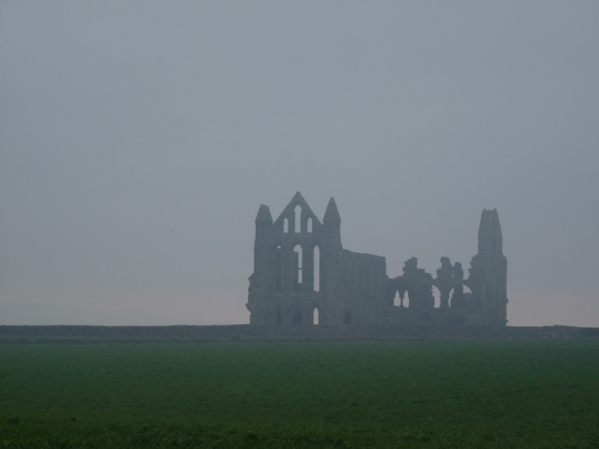 I later wandered along the cliff path to get some shots of Whitby abbey, as the mist started to come down again. Then the shower block, and back to my ready made bed 🙂